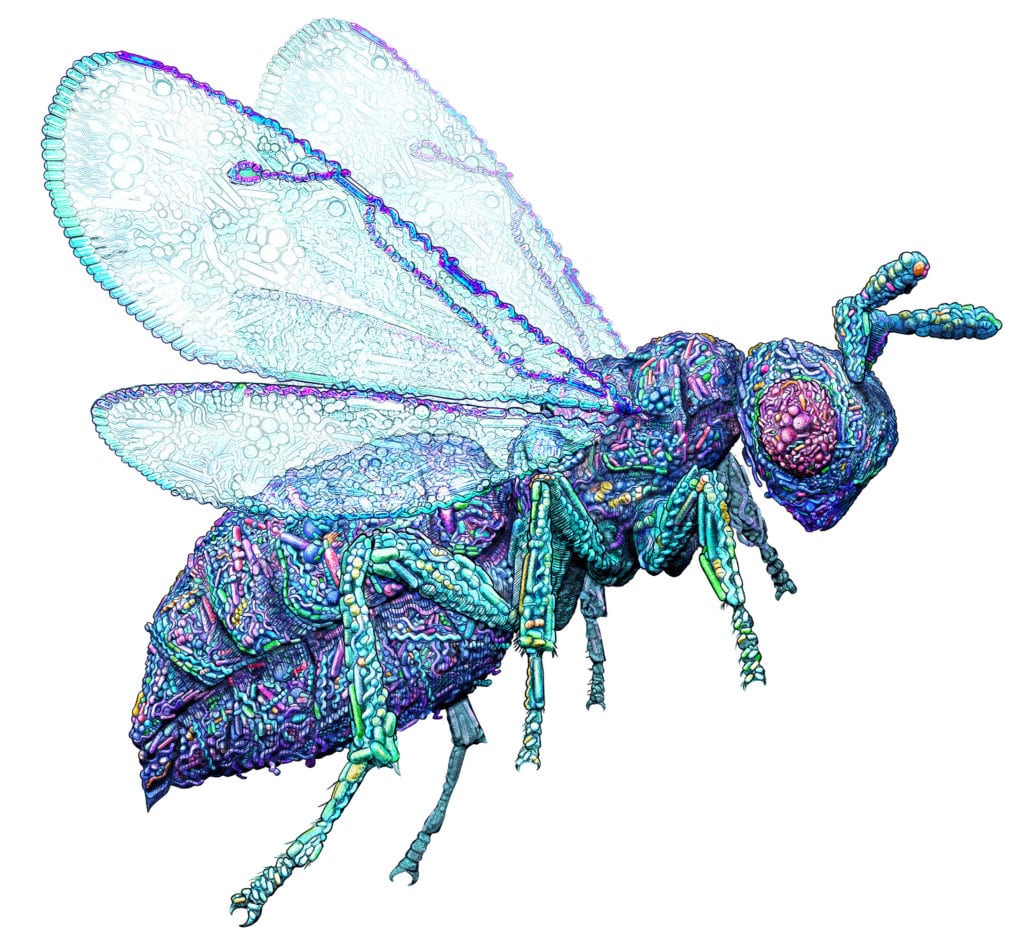 For Science News magazine’s special feature on the microbiome, I illustrated a wasp ‘composed’ of microbes. Here is a how-to on creating the microbial-wasp science illustration for the Science News article on the Microscopic Menagerie.  Check it out for more on the science and links to other artists’ great illustrations. In this blog post, you’ll find insights into my process creating the 3D microbiome landscape art.

In our body, 10 microbes exist for each of our own DNA encoded Cells.

Trillions of cells encoded by our unique DNA make up our bodies–right? Current research is diving into another rabbit hole by suggestions that the microbes that coexist with us are just as much US, as our ‘own’ DNA encoded cells. For every one of our DNA encoded cells, 10 microbes exist.

The microbiome is defined as the collective genomes of the microbes (composed of bacteria, bacteriophage, fungi, protozoa and viruses) that live inside and on the human body. We have about 10 times as many microbial cells as human cells. –Merriam-Webster Dictionary

To better understand the microbiome, scientists study species like the Nasonia wasp’s microbiome. 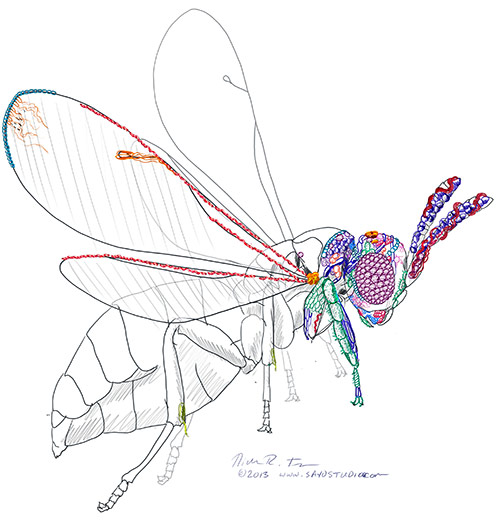 To review the composition and overall accuracy, I started with a pencil sketch to share with Science News. I started by looking up references of the Nasonia wasp (a small parasitoid). After I sketched the wasp, I added microbes onto the very front of the specimen as an example of where I was headed. Science News agreed that it was on track, but gave me some feedback. For example, to not avoid monoculture areas like I originally had in the eye.

Even though we wanted the final style to look more hand-drawn and less computer-generated, I decided to use 3D software to help me with the nuances of the microbial shading. My plan was to first sculpt the wasp, then harness computing power to scatter the microbes. Finally, I would finish up with sketched details in Photoshop. I started out using ZBrush’s z-spheres to create the underlying shape of the wasp. If you’re not familiar with z-spheres, they’re a fantastic way to quickly create a mesh (model) without traditional polygon modeling skills. It’s basically like stringing together beads to create your shape. 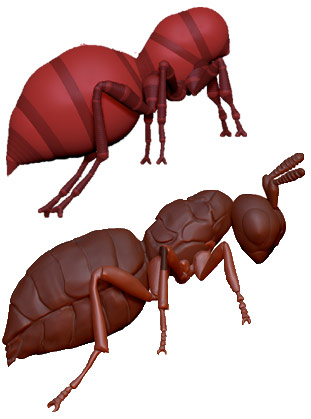 As I built my wasp I kept each major part separate so that I could easily modify the pose. Once I finished the structure, I was able to sculpt the wasp to define the body contours.

Next up, sculpting microbes

When I first started, I planned to use Zbrush to sculpt a base wasp and then Cinema 4d’s mograph module to populate the surface with microbes.  I quickly realized that the scattershot microbe approach wasn’t working. For the microbes to really look integrated and one with the wasp, I needed to selectively place the microbes according to the contours of its’ body. For example, more rod bacteria on the legs, strings of cocci along crevices, etc… My quick computer solution quickly turned into a VERY time-consuming process of hand placing each microbe using Zbrush’s insert mesh tool. Still very cool that it’s even possible with Zbrush!

I sculpted each variety of microbe (a few different rod bacteria, cocci, spiral…) and then created a custom insert brush in ZBrush. This way I could place the microbes across the wasp’s body in a time efficient manner. Afterwards, I used an alpha brush that added a mixed microbe-like texture when less detail was needed. However, I mostly had to revert to individual hand-placement of microbes because the alpha brush had too low of a resolution. After I had most of the microbes placed I turned on polypaint. Polypaint is a ZBrush function that allowed me to individually paint the color of each microbe, and further add texture.

Putting it All Together 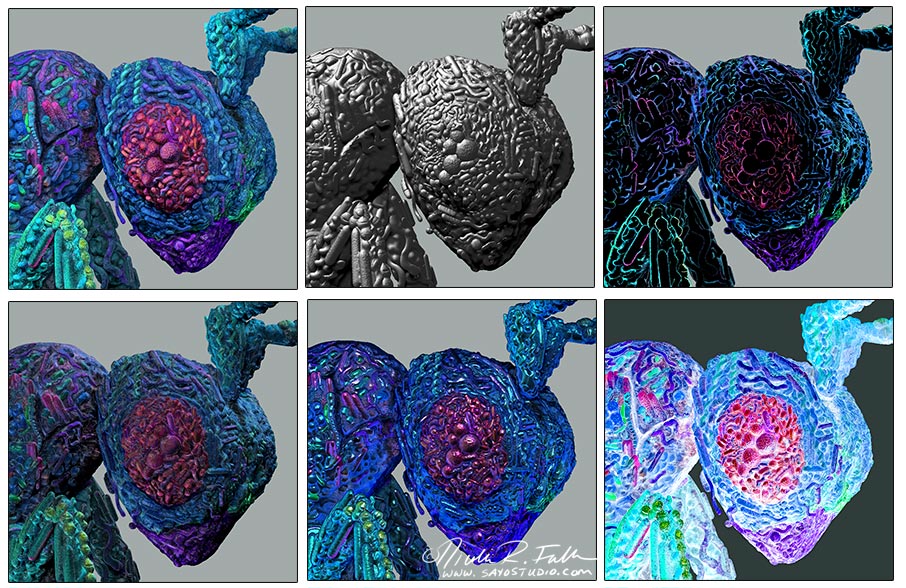 Now that I had my wasp composed of microbes, I rendered several different styles using zbrush’s built-in materials and imported them into Photoshop. Different materials emphasize different lighting, reflection, and highlights. As a result, I ended up compositing several different renderings to get the correct mix of colors and shading. These renderings were produced by using several photoshop layer mix modes (overlay, color, multiply…). In the image above you can see several of the different lighting/material renderings I composited in Photoshop.

With the base microbes-wasp complete I continued to refine the art in photoshop. I duplicated some of the microbes into spots that were left a little bare in the ZBrush renderings by using the Photoshop clone tool. I then added some extra color to help it pop. With the help of Science News’ great art direction, I looked for parts that were flattening out and then hand-drew (on my Cintiq tablet) hatched shading to emphasize the distinction between microbes and highlight the overall body shape. Below left is the final color base consisting of several different composited renderings. Below center is the sketching I did over the top, and on the right is the final art with the drawn line-work on top of the color.

Thanks for checking out my work and my process. If would like more info on the specific programs or techniques mentioned, please let me know by commenting below. 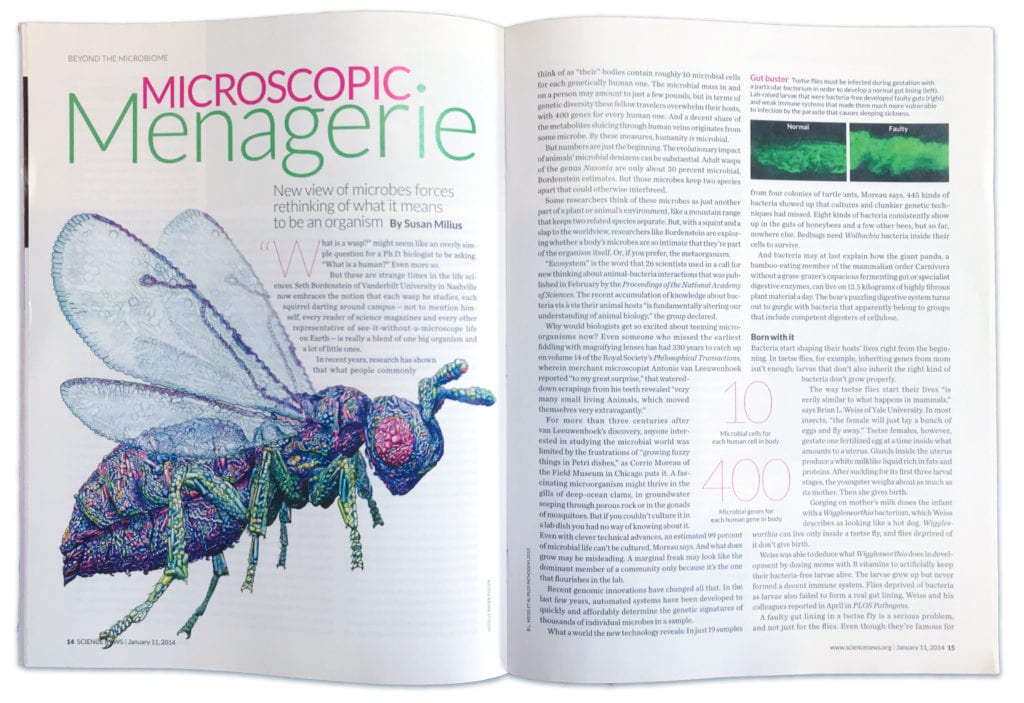 If you feel inspired and would like to join the science art conversation, please sign up for my newsletters!