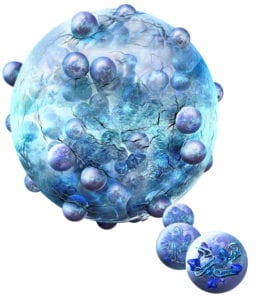 Potential and promise. Most biotech start-ups have ample potential and promise, but many fail because they are unable to communicate their vision. Biotech company Cell Care Therapeutics approached me to illustrate their expertise using synthetic cells to combat diabetic blindness. They needed me to help them visually communicate their technology to potential investors, in a way that garnered excitement, understanding, and support.  The illustration, to be used in their investor slide deck presentations, needed to explain their science and demonstrate their unique niche in biotech.

The constellation of health problems that CCT targets, from neural autoimmune disease to degenerative eye health, is at its root, a problem of cellular inflammation. Other researchers have studied potential therapeutics, but some don’t treat the true underlying cause. While others, have focused on costly stem cell delivery systems. CCT is working to better understand these disease pathways, and is the leading producer of a new kind of therapeutic delivery system called secretomes. Secretomes are special cellular packages sent from stem cells to communicate with other cells, and can be harnessed to deliver therapies to damaged cells and tissue. CCT’s technology removes the need for stem cells, creating the secretomes in an easily injectable therapeutic.

Degenerative eye disease (retinopathy) is one of many debilitating downstream effects of diabetes, and the leading cause of blindness in adults. Like much of the damage that occurs from diabetes, eye disease happens from poorly functioning blood vessels. Unfortunately, the solution isn’t as simple as fixing the blood vessels. CCT is studying the network of supporting neural cells that surround the retina’s capillaries, specifically a network of cells that helps hold together the integrity of blood vessels called pericytes. Healthy pericyte cells help to seal the blood vessels, and act as an anchoring system for other neuron cells.

Working with CEO Nicolas Sohl, we discussed the key aspects of both the disease that needed to be shown, and the technological differences that set them apart from competitors.

The illustration needed to show:

And a comparison of 3 things:

Nicolas and I discussed different ways to visually signal the 3 different states. Nicolas looked at past works, including those that had more of a hand-drawn quality. He described a drawing that signified the old treatment in pencil, while the final healthy state was treated in a more realistic, 3D style.

[Insert 2 thumbnails… one with drawn art, one with 3D cells]

Now that we had a visual direction, I began my work to bring the vision to life. Although I had done many projects on the more well known neurons, I had a lot to learn about pericytes and the larger interplay of neural cells in the eye. I read the background research provided by Nicolas, and looked up my own resources to understand realistic ways to show the pericytes wrapped around the capillary.

One artistic decision I made early on, was to treat the whole illustration as one continuous art piece. rather than repeating the same scene created in 3 different styles, I wanted to create it as more of a tryptic, where the art and the stor continue from one panel to the next. So although stylistically it’s signaled that each is different, we have some continuity and cohesion to the composition.

I started out with a detailed pencil sketch to confirm that I captured the overall point and the scientific details. I also wanted to confirm that some of the slight artistic liberties, like pericytes falling off the blood vessels in the unhealthy state, were appropriate.

I was close! Nicolas confirmed that overall, we were on track, but I had a few misunderstandings in the details of the left and center panel.  I edited those portions and sent it back for one morereview, and then got the approval to move to color

With the visual map approved, I was excited to start on color. Because so much of th message would be conveyed with different styles, I wanted to get going quickly so that I could confirm everything was still on track in color. I used a mix of 3D programs and photoshop to create the art.

First, I created the main components in the 3D program Cinema 4d (C4d) and going back and forth between it and Zbrush. Next,  I modeled the swooping blood vessel and the basic shapes of the pericytes wrapped around the vessel. Then, I digitally sculpted the detailed arms of the neural cells and the diseased pericytes bumpy distortions in Zbrush. I continued to perfect the look of the cells, until I was ready to collage them together in Photoshop. I hadn-drew the ‘sketched’ sections of the left and right panel, finalizing the full-color draft. At this point the artwork felt close to complete, with only a few details left to add. I wanted to send it to CCT to see how they felt after seeing the color art for the first time.

Overall, the art was lining up with Nicolas’s vision, with a few constructive requests. One, he wanted more contrast between the 3 sections. Two, he felt like the key technology, the synthetic stem cell in the center panel, was feeling a little flat and cartoony. On the left side we remove the color completely to really make it feel like a pencil sketch. In the center, I re-created the synthetic stem cell to make it feel more concrete and tactile. As a final touch, I worked on the texture of the neural cells a bit more, to give the art that final spark.

The art has become the underpinning of CCT’s investor presentations and the face of it’s  business social media. In 2018 CCT finished it’s first round of investor funding, with 4.3 million dollars in seed money to support it’s production of synthetic stem cell therapeutics. Their research continues into treatments for eye disease, and I’m proud to continue working with CCT to visualize their developments.