Discovering Light from the First Stars, NSF Animation and Illustration

In the oversaturated news cycle, it’s difficult to bring attention to even the most deserving stories. The National Science Foundation funds a vast array of astronomical research, but often the discoveries don’t come with pretty pictures. Arizona state university (ASU) lead astronomer Judd Brown and team was publishing work to change the history of the universe. The problem? They didn’t have an attention-grabbing image. NSF wanted to ensure that the NSF-funded discovery got the attention it deserved. That’s where SayoStudio came in, to create an accurate and eye-catching astronomy illustration and animation. The science illustration and animation of the Early Universe’s First Stars were used in an NSF media event and distributed as a press release for use by ASU and NSF.

The NSF telescopes are ground-based, as opposed to the NASA satellites that orbit Earth. The NSF telescopes are often able to observe data from deeper space. The Earth-based telescopes collect data far outside our visual perception. In this case, astronomers at ASU*, MIT and UC Boulder studied radio wave signals from the early universe. Although the discovery is significant, the images weren’t the stellar Hubble imagery that the public has come to expect of astronomers. Thus, Nicolle had the opportunity to use the information we know to imagine what this early universe looked like. *They reported their findings in the March 1, 2018 issue of Nature.

From the NSF press release:

“Finding this minuscule signal has opened a new window on the early universe,” says astronomer Judd Bowman of the Arizona State University, the lead investigator on the project. “Telescopes cannot see far enough to directly image such ancient stars, but we’ve seen when they turned on in radio waves arriving from space.”

First, Nicolle used the patterns from the cosmic microwave background (CMB) as the basis for the illustration’s background. The CMB represents the energy from the early universe and was the predecessor to these first stars. To make the artwork unique Nicolle shifted some of the colors typically used in the CMB from green, red, and yellow to magenta, red, and blue. Artistically, this made a stronger base for the blue stars. Although NSF allowed for a lot of artistic freedom, Nicolle wanted to adhere as closely as possible to what is known. In this case, astronomers knew that these first stars were massive and emitted a deep UV blue light.

Drawing the stars came together fairly quickly, based on astro-photography of stars we can see. The first stars didn’t look that different from what we see today. They were massive, but no other stars existed yet for comparison. To complete the story, Nicolle really wanted to focus on depicting the structure of the early universe. The first stars emerged from filaments of matter that crisscrossed the early universe. The filaments absorbed the stars’ UV light, thus the blue glow in the illustration. The UV light dims our recordings of the CMB. Interestingly, the CMB dims more than expected, indicating that dark matter may have been loosely associated with the gaseous filaments.

After setting the stage for the illustration, Nicolle considered how to portray this web-like network. Digital art sometimes feels static. Digitally hand-drawing the filaments gave them an organic, energized feeling. Physicists’ simulations served as great reference points. The web was built up with smaller and smaller strokes using Adobe Photoshop.

With the stars illustration finished, NSF could use the art for publicity and media outreach while Nicolle got started on the animation. In the animated format, Nicolle could use the drama of light to show how the universe was initially dark. When the stars were born and their light begins to burn, we see the filaments start to glow. The previously hand-drawn filaments had to be re-created in a 3D network in Cinema 4D. The goal was for viewers to “fly” through to see the star. Nicolle modeled a web in Cinema 4D, then used C4D and x-particles to distribute the small bits of matter across the web, creating the speckled, intangible effect.

First Stars – Science Animation and Art in Use 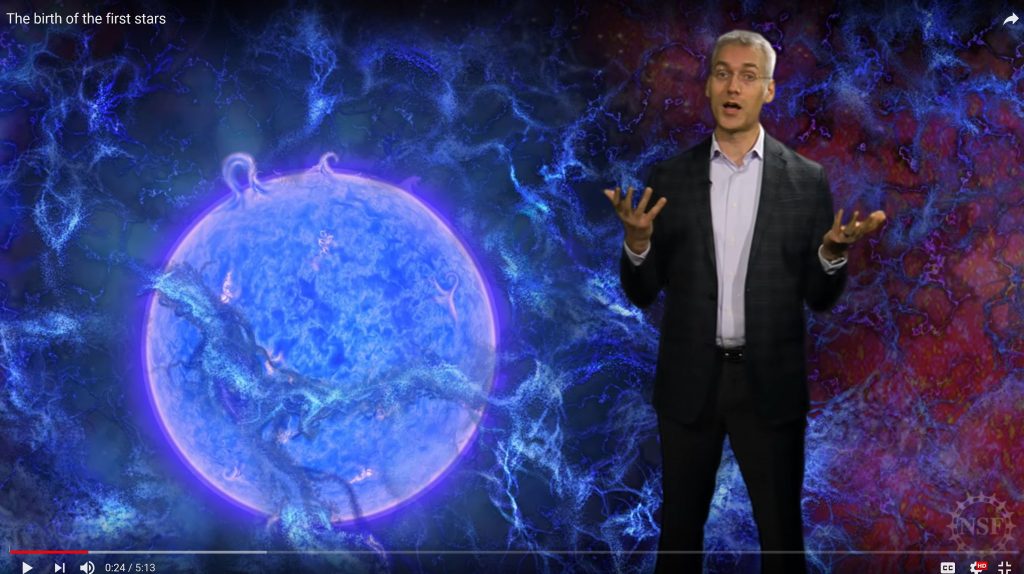 “Your spectacular artwork is being used in many media, Nicolle, and is helping us generate news coverage!  Thanks so much!”

Ultimately, the National Science Foundation used the First Stars animation and illustration in its Press Conference and shared the art in press releases across the media spectrum. The First Stars illustration drew digital visitors to NSF, to MIT and the University of Arizona, and was shared across a vast array of media outlets including CNN, Washington Post, ABC News, National Geographic, NPR, The Guardian, and more. 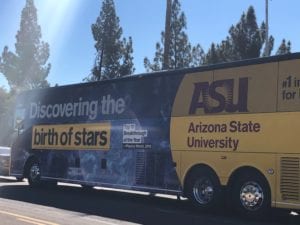 This fantastic discovery was named one of the top 10 discoveries of 2018. The University of Arizona used the illustration in a publicity campaign, where the First Stars illustrations were displayed on billboards and buses across Phoenix.

“Lots of great branding today… and they held Nicolle’s stunning star illustration on the screen for like a full minute, so the logo was up for awhile. The First Stars image, which continues to get top billing in Google search, is now on the side of a bus. Images are critical to what we do—thanks for giving us such impact. ”