Unlike the more romantic visions of nature’s grandeur in many of the U.S. National Parks, the Minuteman Missile National Historic Site’s (MIMI) mission can’t be captured in a photograph. Their mission is to educate the public about a darker aspect of American history, and most of it is hidden underground. The National Parks commissioned SayoStudio to create an accurate portrayal of the physically hidden portions of the missile site, juxtaposed against the wide-open landscape of South Dakota’s great plains. The illustration would stretch across the front of their new park brochure, and show 2 separate sites, physically set apart by 11 miles. Conceptually, it would help visualize the underground portion of the park to convey “hiding in plain sight” and the sense of being on constant alert.

Above ground, it doesn’t look like much: a chainlink fence marking a square of gravel, surrounded by rolling hills of grazeland in America’s heartland. In reality, these unassuming chainlink fences denote the location of underground nuclear missiles. The US government built the missiles in the 1960s during the heart of the cold war with Russia. Until the early 1990s, 1,000 nuclear missiles were scattered across the Dakotas, Montana, and Wyoming. The missiles were manned and ready to be deployed within minutes, hence the minuteman name and reference.

Back then, each group of 10 missiles was controlled by 1 site, where around the clock, 2 U.S. Air Force Missiliers sat ready to input the codes to launch. Much like the missile sites themselves, the control centers are unassuming, house-like buildings above ground. Shockingly, they guard deep elevator shafts that brought the 2 missiliers to the capsule. Today, 100 of these nuclear missiles are still functional. The historic site gives a singular look inside the control center and the missile tunnel.

Working on this project was a unique treat, as a site visit was part of the project budget. Traveling to South Dakota helped ensure a full grasp of the dimensions and impact of the site. Growing up in the Pacific Northwest, Nicolle had never been to the Great American Plains. Experiencing the rolling thunderstorms in person, and descending into the Missile control center buried underground, gave her a depth of understanding that she wouldn’t have otherwise had.

Nicolle took lots of reference photos onsite. Details like the control panels could be integrated into the 3D models, and darkening clouds would set the mood of the scene. The visit also allowed Nicolle to meet with park staff including volunteer ex-missiliers, and to tour the MIMI visitor center, Delta 01, Delta 09 and the surrounding area. She identified key components in the reference material for clarification, like the suspension systems. She also got a feel for the depth of the sites and the hidden nature beneath farms and ranch land.

Back home in the Pacific Northwest, Nicolle started creating the 3D models based on the schematics provided by the park. Before adding texture and shading to the models, she sent the wireframes to the Park for review. This allowed them to decide what angle best showed the underground space and the above-ground landscape.

The National Parks staff confirmed that the model looked accurate and had the ideal compositional viewing angle. Next came the textures of the landscape and missile buildings to bring it to life. Components were created in several different 3D programs and composited in Photoshop. This multi-step render process and digital compositing allowed for clarification of the cutaway and control over the areas of emphasis.

The thunderstorms and epic sky-scapes inspired Nicolle during her visit. She suggested that showing the thunderstorm to emotionally convey the dark themes of the historic site. The park staff agreed. When the park map is folded, the photograph-like sky and landscape illustration is the only thing that shows. Only when a visitor opens the map, can they see the full underground components.

SayoStudio delivered the final artwork to the cartographers and designers at the National Park’s Harper’s Ferry office. They incorporated it into their larger design to interpret the history of nuclear warfare. Our art was integrated with historical photos, text, and maps. Today, the brochures guide visitors in exploring the Minuteman Missile Historic Site. 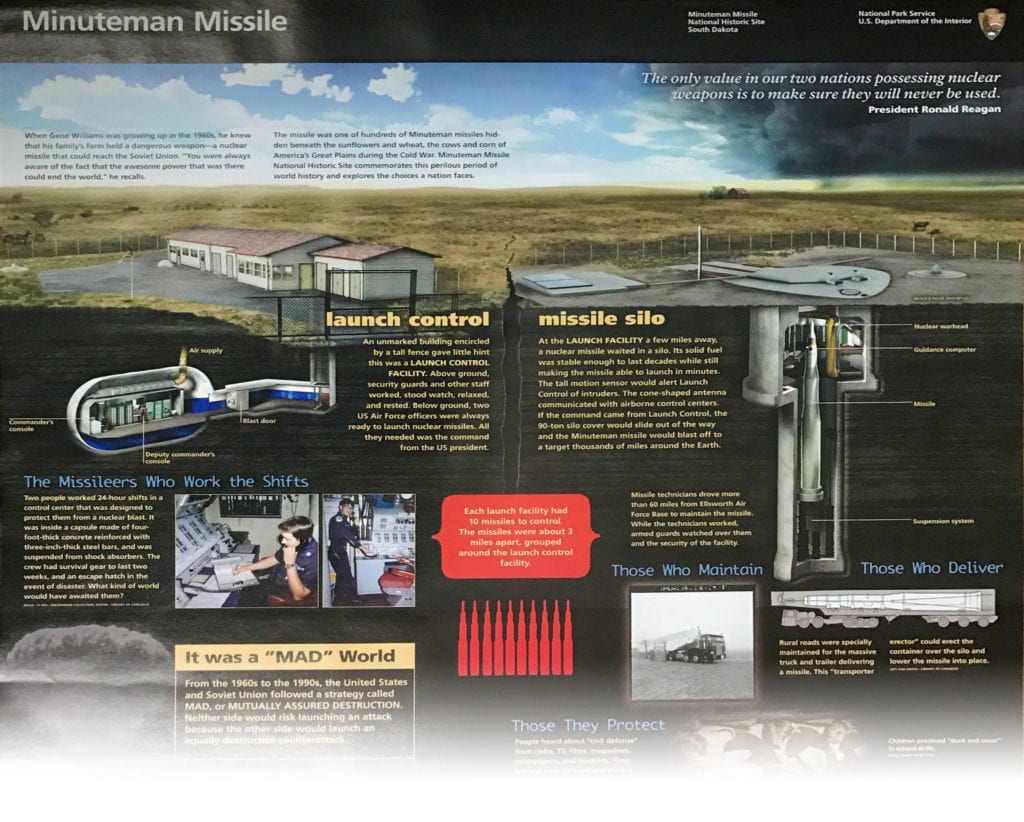