As a tech start-up, you’re under immense pressure to quickly prove that your platform is poised for success. SayoStudio created science communication graphics for biotech leader Kezar Life Sciences from the beginning of their journey. These illustrated mode-of-action diagrams, cell landscapes, and editorial science illustrations have been used across Kezar’s website, in their pitch decks and presentations, and on social media. In this case study we look at creating branded biotech images and explainer graphics to help Kezar garner support and investors.

Below, we’ll introduce you to Kezar Biosciences through the science graphics we’ve created for them.

Who is Kezar Life Sciences? Kezar Life Sciences develops innovative cancer and autoimmune disease treatments. They seek to understand either side of a protein’s journey in our cells. Once proteins are built, they’re moved from one part of the cell to the another through the secretory pathway. At the end of a protein’s journey, Kezar studies how proteins are broken down and often reused. The details can sound a bit overwhelming. And therein lies the problem. 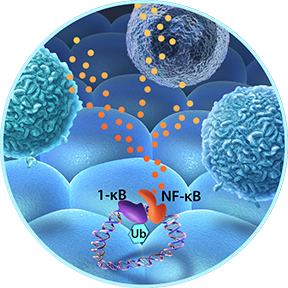 How do you quickly grab people’s attention and explain your science?

That’s where we come in, to help companies like Kezar, share their incredible innovations with the world in a way that’s accessible AND memorable.

Our science communication job is 2 parts:

Above, you may have noticed that we listed creating excitement first. To an outside viewer, that’s the first task. How do we draw a viewer in? How do we make them curious? And how do we create a memorable vision?

But from the creator’s side, we need to start first with the science. To really translate the excitement of science, we first have to understand it. Read on to learn about our approach and process to accomplish these objectives and take Kezar’s corporate visuals to the next level.

What about the science? Learning what goes into the biotech images

We pride ourselves on our scientific knowledge, including cell biology and biochemistry. But the immunoproteasome? It was new to us—and that’s one of the things that’s so fun about our work—learning new things.

You may recall, that proteins are the end result of our genes. They are our cells’ building blocks, and in many instances, they’re our body’s nanoscale machines. Like hemoglobin that carries oxygen, membrane pumps that move salts, and of interest to Kezar, the immunoproteasome that breaks DOWN other proteins when they’re not working correctly.

We learned that the immunoproteasome isn’t always hanging around in our cells. Under normal, healthy circumstances, it only forms when a cell is under stress. Signals trigger the immunoproteasome to get prepped to clean up unused cell parts. As part of the cell recycling system, it’s part of the larger protein regulation system of our cells. Problems occur when it’s overactive.

Pencil Sketches of our Science Illustrations of the Immunoproteasome

Cell biology is fascinating. So many different systems are impacted when you target one component. This also means that it can be difficult to show the downstream events from a therapeutic intervention. It was important that we show how:

To verify that we understood the technology and were focusing on the important parts of the story, we created several pencil concept sketches for review. Below, are three different ways of presenting the information. We worked with Kezar to decide which best represented their science message. Working together, we decided that the first sketch, with circle insets, best showed all of the different cellular functions impacted. This design also had the added bonus, that it would allow them to use those images as stand-alone graphics throughout their presentations. 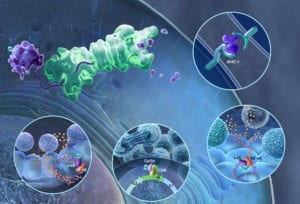 Kezar came to us with an initial brand design, including an awesome logo and a color palette (from another great, but unknown to us, graphic designer). Starting from Kezar’s logo and their science, we got to work creating unique science graphics that fit their brand.

Illustration Driving Design, Carrying the science art into the PPT

As a full-service communication shop, we often create PowerPoint slide designs as well. Beauty doesn’t always come to mind with PPT’s, but we knew we could do it. We referenced the curves of both the logo and the immunoproteasome for the anchor design element of the PPT template. We also worked with Kezar to decide which elements would be useful as stand-alone elements in their presentation.

We’ve been so happy to watch Kezar continue to reach new milestones, and for the promise their technology holds. Since their initial $23 million investment when we met them in 2015, they’ve now reached $123 million in funding. Their drug targeting Lupus is in Phase 2 clinical trials, and another potential cancer therapeutic is close behind. And finally, we are so excited to see them thrive, because the people that make up Kezar are just wonderful humans. Our experience working with them has been validated, with their recognition as one of the Bay Area’s Best Places to Work.

Over the years, we’ve continued to support Kezar by creating science explainer graphics. We just finished illustrating the Sec61 pathway in the cell. Sec61 is a different part of the protein process, where it helps early, unformed proteins into the Endoplasmic Reticulum. It’s an exciting new cancer target.